Celebrating Perseverance and Tolerance at We Day Montreal 2017 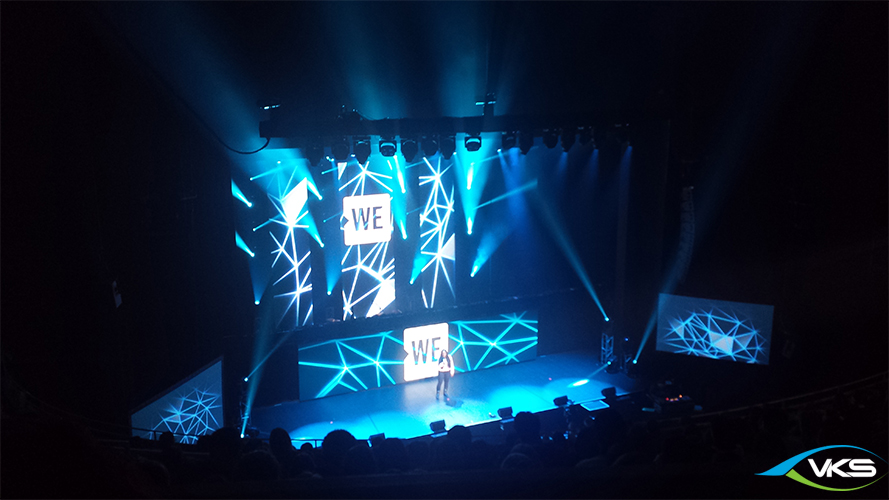 On February 24, 2017, VKS attended this year’s international charity event We Day in Montreal. The Théâtre Saint-Denis welcomed over 2 000 high school students from 120 schools across Quebec. The cloudy and rainy day didn’t prevent the attendees from experiencing the warmth of hearts full of good deeds. Celebrating the students and their educators’ humanitarian achievements once a year is reason enough to check out this one of a kind gathering. Music performances, encouraging testimonies and fun activities make the day memorable, where teamwork, tolerance, and perseverance are celebrated among the youth.

What is We Day?

We Day is a one-day event held in different cities around the world, where the We Charity celebrates achievements by students and educators in their local community and in global missions. Whether it’s by volunteering, fundraising, or informing people on various causes, only the most devoted students that made a difference in one local, and one global cause through the We movement, are invited to that show. Admission is free thanks to sponsorship from various organizations. International personalities such as Selena Gomez, Prince Harry or Canada’s Prime Minister Justin Trudeau have participated in the celebration.

Inspiring stories from role models for the youth

We Day Montreal was hosted by Quebec’s renowned TV personalities Maripier Morin and Nicolas Ouellet. With guest speakers from different backgrounds, many stories appealed to the youth and even the older ones, to be the change we would like to see in the world, as said Gandhi. Actress Mia Farrow shared about bringing awareness to the Darfur crisis. Inspirational speaker Spencer West hosted a talk show with United Nations High Commissioner for Refugees (UNHCR) official Denise Otis. Imam Hassan Guillet shared about staying away from hateful content on the Internet and building a more tolerant society with our neighbours regardless of their origin or religion. That speech had a particular resonance after the Quebec City mosque attack earlier this year. A large number of young speakers also took the stage such as the 13 years old artist and activist Elliot Miville-Deschênes, the social justice speaker Kharoll-Ann Souffrant, the anti-bullying militant Lynelle Cantwell or the photographer and Syrian refugee Hani Al Moulia. All these pep talks were received with consideration and enthusiasm by the young crowd.

Great entertainment for a dynamic audience

Music, dance, and uplifting videos were also part of the event. Award winner Alex Nevski shared some of his biggest successes with his live band. The Voice winner Jordan Smith filled the venue with his incredible talent. Canadian singer Tyler Shaw followed with a heart lifting performance. Throughout the day, the Sarah Steben Dancers transformed Théâtre Saint-Denis into a huge dance floor as they animated short sessions of the We Dance to the delight of the participants!

We Day is about students, but it is also about the role models that make the movement one of the biggest charities in the world. Craig Kielburger, one of the two brothers who founded the movement, was there in person to encourage the volunteers, among other activities. Our host, Annie Éthier, We Charity director for Quebec, Ottawa, and French Canada, spent thoughtful time with guests and volunteers.

Among the many students and teachers that attended the event, the story of two of them could summarize the spirit of the We movement. Catherine, a high school teacher from Ontario, sees We Day as an occasion for educators to get recognition for leading students into life-changing humanitarian activities locally or around the world. Catherine’s student, Courtney, aspires to become a teacher and sees Catherine as her role model. She is keen to help the younger ones make a difference. Catherine’s devotion to her students is Courtney’s inspiration, as she has spared no effort to teach them the good values she was portraying herself.

We Day 2017 in Montreal was full of inspiring stories, powerful testimonies, and great entertainment. An event tailored to the youth in need of true and optimistic models to look up to. The thousands that came to Théâtre Saint-Denis certainly went back home with more motivation to become life changers themselves. The event is also a way to say thank you to the many volunteers, educators, and donors that spent the year giving time or money to those in need, in local communities or internationally. VKS is proud to participate in We Day, empowering the youth to change the world, one person at a time.