What is a Pareto Chart?

A Pareto Chart is the visual manifestation of Pareto Analysis where users can visually perceive how the minority (often 20%) affects the majority of outcomes (often 80%). This is based on the 80/20 rule, a fundamental pillar of Pareto Analysis.

Once companies have determined which minority creates the biggest impact, they can work to mitigate or increase those numbers to optimize their operations. But first, it is helpful to create a well-formed and thought-out Pareto Chart.

How to Read a Pareto Chart

A Pareto Chart is a type of chart that combines the qualities of a bar graph and a line graph so that viewers can simultaneously track the frequency of the observations and the total cumulative percentages.

This may sound confusing but its actually fairly simple

Along with the bar and line graph, the Pareto Chart is comprised of 3 axes that help measure the given values.

It is very important to note that the contributing factors need to be listed in descending order based on their frequency of occurrence. If not, the Pareto Chart will not be accurate or easy to read.

What is a Pareto Chart Used For?

Anything that observes a natural distribution can be plotted with a Pareto Chart.

Examples of the Pareto Distribution are:

The distribution does not need to be a strict 80/20 split but this is the most commonly observed distribution under the Pareto principle.

Within manufacturing, Pareto charts are commonly used for quality control where organizations tally the number of defects and determine which defects are causing the greatest amount of problems and/or lost revenue.

The magic of the Pareto Chart is that it is both a line and bar graph, allowing organizations to get an accurate view of the number of defects while understanding their cumulative value next to each other.

How to Build a Pareto Chart

At this point, you might ask: how do we take this information and build it into a Pareto Chart?

The first thing you’ll need to do is compile data. After you’ve done this, it's a walk in the park.

To explain this, we’ll create an example scenario that follows the defects of a toy car manufacturer.

Imagine you run a toy car factory where you fabricate high-end electronic wooden car models. Business is good but there’s a problem. In the past year, you’ve had a total of 994 defects. That’s an average of nearly 4 defects per working day. Something needs to be done!

Thankfully, you’ve recorded all defects over the past year. By performing Pareto Analysis on the experienced defects, you’ve built a table outlining the type of defect, their total number, the cumulative frequency, and the cumulative percentage. 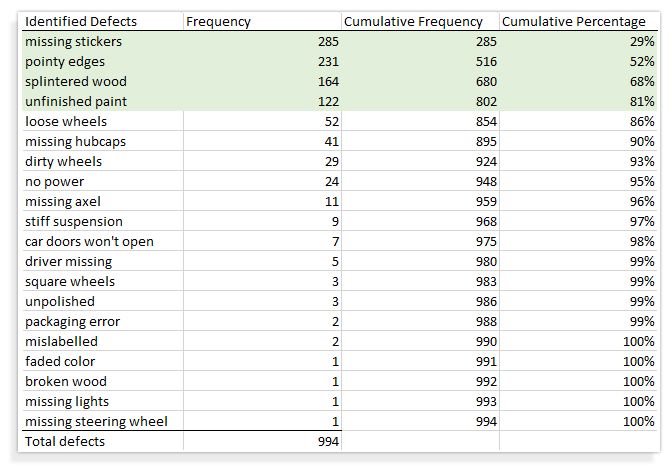 Using the same information as the table above, we can now compile the data into the below chart. You can learn how to create a Pareto Chart in Excel by watching the video at the end of the page. 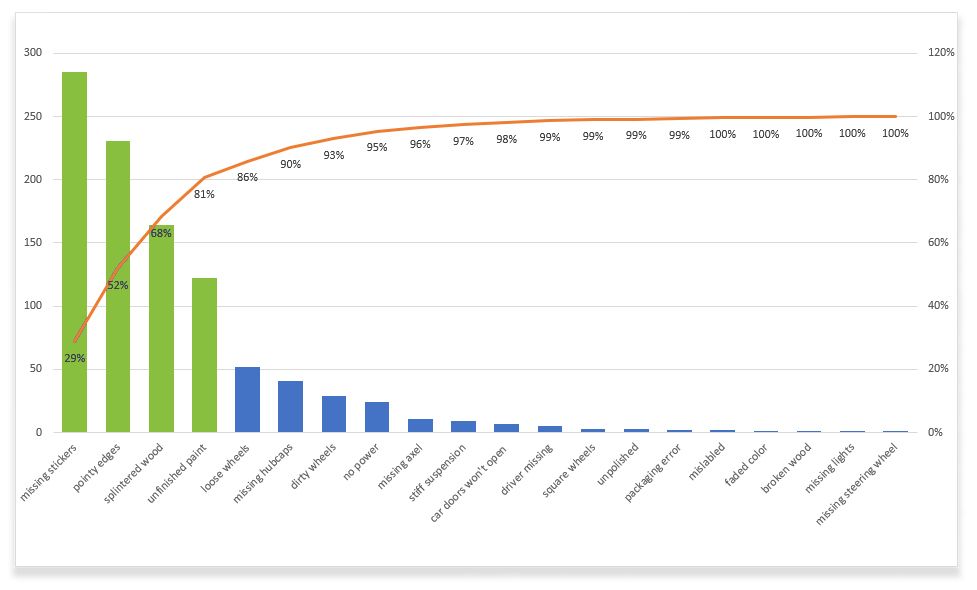 Each bar represents one defect category (I’ve highlighted the top 4 in green) and the numbers on the left indicate their frequency. The orange line (arguably the most important part of the Pareto Chart) is the charted cumulative percentage. For this scenario, I have made the distribution an 80/20 split but as we’ve discussed this may not always be the case.

From the Pareto Chart, we gain 2 key insights.

After the fourth bar, the orange line doesn't have that much higher to go. Indicating that the greatest impact has already been made. You’ll want to focus your defect mitigation efforts on the first four bars. Also, since the other defects are small by comparison, they can be left as secondary issues to solve at a later date.

As those issues are fixed, you can return and perform another Pareto Analysis to find the next minority of issues that are causing the greatest impact on your business. Progressively you can knock down the most impactful problems in an intelligent and worthwhile order.

Building a Pareto Chart is fairly simple within a digital spreadsheet software like Excel. Watch the short video below and learn how to create your own Pareto Chart using data exported from VKS.

Would you like a more in-depth understanding of Pereto Analysis and the 80/20 rule? Discover why the distribution is so common and how to use it to your advantage within your operation.

Read up on manufacturing trends and noteworthy industry news

Keep in touch with us and our expanding, up-to-date knowledge base